MIAMI, FL – On the last day of final exams for the 2019 class of the White & Case International Arbitration LL.M. Program at Miami Law, Assouline & Berlowe – a Florida-based business litigation and transactional law firm – hosted a farewell cocktail reception for the students at their downtown Miami office in the Miami Tower. Eric Assouline, J.D. ’96, and Peter Berlowe, J.D. ’98, along with other partners and associates of the firm warmly welcomed the students and shared with them their work experiences and career advice pertaining to transnational litigation and international arbitration across different legal industries such as construction law, intellectual property, cybersecurity, blockchain, bankruptcy, corporate, and M&A.

Assouline is also a board member of the School’s Alumni Society and shared with the students his experience at Miami Law and how it shaped his career landing him jobs at the best firm in his chosen area of interest.

The partners at Assouline & Berlowe also gave a special mention to International Arbitration Adjunct Professor John Rooney for connecting the international arbitration students with the firm. Rooney, with whom many students enjoy a great mentoring rapport, also serves as counsel and arbitrator in many international disputes, including proceedings under the AAA/ICDR, ICC, and ICSID Rules.

“We had the opportunity to meet with experienced lawyers in the field of arbitration and learned more about the every-day practice of arbitration in highly specialized areas, such as patent rights and construction,” said. Konstantina Zormpa, a Greek lawyer in the International Arbitration J.D./LL.M. joint degree program. “I was impressed by the team of Assouline & Berlowe because they combine a high level of legal expertise with a very friendly, approachable attitude. Partners and associates shared stories from their practice and showed a genuine interest to our career aspirations.”

“The LL.M. Student Reception with Assouline & Berlowe was my favorite social event of the year!” Angel Bermudez, a U.S.-trained J.D./LL.M. joint degree candidate, said. “Everyone was courteous and genuinely interested in getting to know each other. That the firm’s attorneys spent a few hours with us after a long work week speaks volumes to their great character.”

“Interactions with highly qualified professionals at social gatherings like these surely contribute to a better understanding of the industry. There was so much to discuss about our courses and papers, and the interest is often reciprocated with new ideas and sometimes collaboration”, said Ishaan Madaan, an International Arbitration LL.M. student from India and holder of the FDI Moot Scholarship.

The White & Case International Arbitration LL.M. Program, under the leadership of Professor Jan Paulsson, holder of the Michael Klein Distinguished Scholar Chair, provides a unique individualized educational opportunity for a small group of top-quality students from around the globe, wishing to acquire an in-depth grounding in the field of international arbitration as a platform for a successful career. The program – the only one of its kind in the United States – is open to U.S. and foreign-trained law graduates, and is ideal for newcomers to the field or experienced practitioners looking to enrich their skills and knowledge. 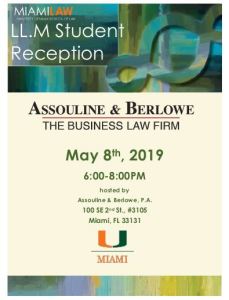 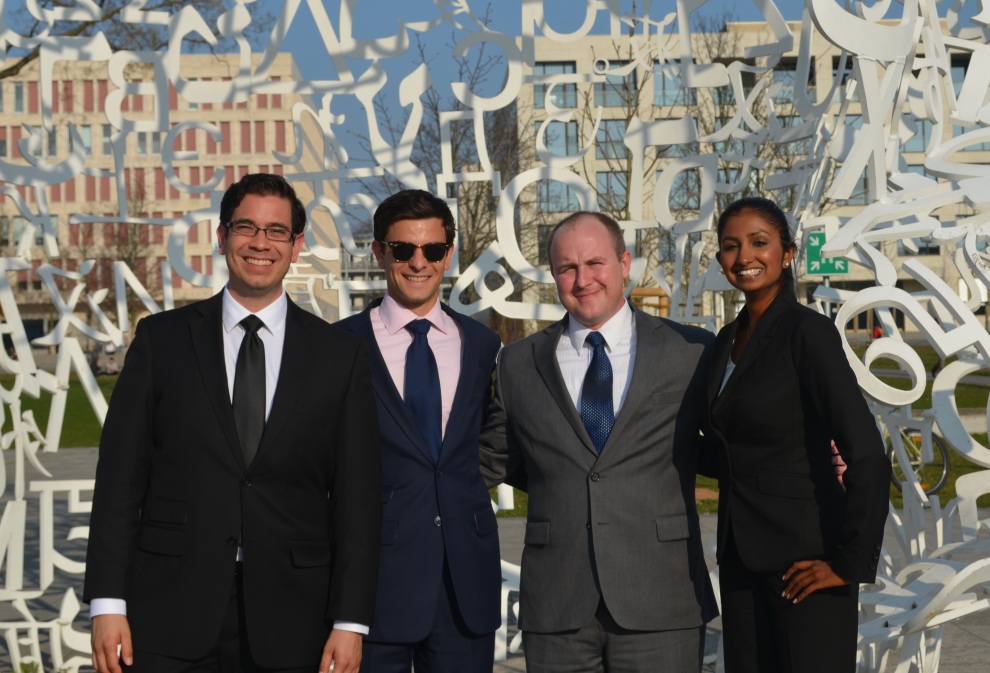 The University of Miami School of Law is already one of the top law schools in the State of Florida.  On March 14 ,2014, Coral Gables, Florida, and the entire UM community, began celebrating it’s first place finish at the 7th Frankfurt Investment Arbitration moot competition.

The three UM law school students representing UM’s team, Joseph Matthews (3L), Benjamin Keime (2L),  and Abirami Ananthasingam (3L), began preparing for the international competition in August 2013.  The competition was held during March 10th through the 15th 2014 at the University of Frankfurt in Germany.

The competition was against 59 other international law school teams.  The UM team was lead by Assouline & Berlowe attorney, and UM alumni, L Andrew Riccio (JD 2011).

The substance of this year’s moot court competition was entitled “The Perfumes of Arabia”, based in 12th century Yemen, relating to a new customs regime on merchants in Aden, the Yemeni port.  Fictional claims were brought under a multilateral investment treaty comprised of countries of the medieval Ayyubid Empire.

In describing the substance of the moot court problem, “Coach” Riccio stated that “this year’s was the most complex and interesting of them all.” He was especially impressed by the caliber of students at the competition.  Given the complexity of the problem, students invested considerable time preparing their arguments.

The moot court team competed against law schools from Europe, the Caribbean, and Asia, and ultimately tied for first place with the team from Sciences Po (Paris).  The winners, both the UM and Sciences Po teams, will receive a three week placement at the Hague Academy of International Law.

This victory was extra special for Attorney Riccio, who participated on the team as a law student participant in 2011 , when UM won the competition for the first time.  After this win, UM is the first repeat winner of the competition.  When Riccio competed in 2011, it was under the guidance of his mentor, Assouline & Berlowe International Arbitration Partner Daniel Vielleville.  Now, Riccio has taken the reins of UM’s team and as the coach, the student has proved himself as the master of UM’s second winning team.

For more information about the competition, or to discuss any business issues, please contact Mr. Riccio.